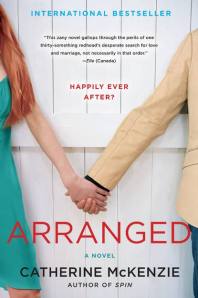 Anne Blythe has everything she wants in life, but she can’t seem to land a husband no matter what she does. The matchmaking company she discovers turns out to actually be a marriage arrangement company, and despite her shock and fears, she finds herself going along with the procedure. The company claims that it has a 90% success rate matching couples based on an in-depth analysis of personality traits and backgrounds, and the relationships are based on friendship and rational compatibility. Since Anne has been basing her past relationships on lust for the most part, and it hasn’t really worked out for her, she can see the appeal of such a logical approach to marriage.

So Anne is matched with a man named Jack, and she flies to Mexico to meet him for the very first time at a resort full of couples who are doing the same thing. At first she thinks she has lost her mind, but when she begins talking to her potential fiancé, she finds that she actually seems to like the guy. He’s pretty cute and they actually do have a lot in common. Maybe this arranged marriage thing is really going to work out for her.

Anne thinks she has found a back door to happiness until she finds out a very, very harsh truth. Jack may not be the person she believes him to be, and things are about to get very, very complicated.

Catherine McKenzie has also written other novels, “Spin” and “Forgotten“, so if you like her “Chicklit”style, be sure to look for McKenzie’s novels at The Boulder Bookstore today.