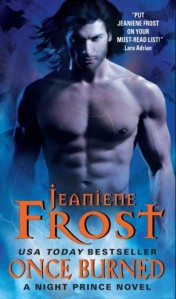 Paranormal Romance lovers, your prayers have been answered.

Leila is a circus performer with a few special gifts. She is a psychic who can see your worst sin upon physical contact, and she can channel electicity, even to the extent that she can kill with her power. She has lived in relative anonymity, traveling with the circus, where any strange events can be passed off as showmanship and eccentricity.  Her best friend, Marty, is a vampire, and he has been helping to keep her gifts a secret for many years. But one day, Leila meets a couple, and when she brushes against one of them, she realizes that the husband has learned that she is having an affair and intends to murder her and dispose of her body in the wilderness. The crime is prevented, but suddenly she is famous…And this is dangerous for her, especially in vampire communities, where a psychic’s gifts could be put to use helping them to find, and kill, enemies.

In very little time, Leila has been kidnapped by vampires who want to kill the alpha vampire of all vampires, Vlad Tepesh (yes, Vlad the Impaler). She attempts to find him and finds herself talking to him in her thoughts. They have a psychic connection and he agrees to rescue her from her kidnappers…But there’s a catch. She will now be taken into custody by Vlad and his entourage until his enemies have been smoked out and destroyed..For her own safety, of course. So Leila finds herself sleeping in a castle in Romania, surrounded by vampires, and against her own better judgment, finding Vlad the Impaler to be sortof, well, SEXY. She is also finding that he can help her harness her powers and use them as a brutal weapon against enemies.

Before she knows it, Leila has become kindof a badass. And she has revenge in mind against the vampire who wants her for himself. So the hunt begins…

Once Burned is one of the more violent paranormal romance novels I have read, more like Laurell K. Hamilton’s Anita Blake books, or Anne Rice’s darker take than Twilight or other more cozy vampire novels. If you don’t like sheer violence, you may be put-out by some of the more gorey details…It’s also very sexy. This novel is the first in Jeaniene Frost’s Night Prince Series. Fanatics, don’t miss this one!

Book Trailer for Once Burned, property of Jeaniene Frost.