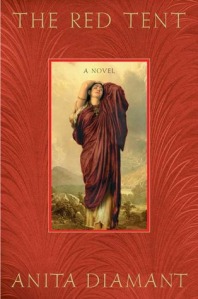 Dinah is the daughter of the Biblical Jacob, his only daughter in a passel of 13 children by 4 different wives. She is briefly mentioned in the Bible, part of a story about a young lady who falls in love with a a nobleman and falls into his bed before they are married, and whose father and brothers did something horrible in retaliation of her lost honor. The story of Dinah starts when she is a young girl, and ends when she is an old woman, and shares what it would have been like for a woman in biblical times, when women were treated like a commodity, traded and negotiated for like livestock, and expected to be fruitful with healthy sons.

Surprisingly, however, this novel is empowering for women. Despite the conditions, these women were strong and worked together with unbelievable loyalty and solidarity. The wives had unbreakable bonds, and the Red Tent, where a woman was expected to pass her monthly courses, became a place where a woman could just be a woman among friends. Plans were made, advice was passed around, compassion was doled out. Possibly the most important lesson of this novel is that the relationships between women are remarkable, beautiful and unbreakable.

I wasn’t sure what to expect when I started this novel, but I heard it was really good and I have always been interested in biblical mythology and history. I was blown away by the strength of the women, through everything they were subjected to in the course of their lives. The Red Tent, by Anita Diamant,  is a must-read. I promise.