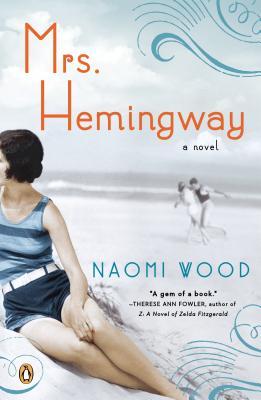 Anyone who knows me well AT ALL knows that I will never turn down a book if I hear the word “Hemingway”. I’m not sure why this is, because as far as I can tell he was a moody, morose alcoholic most of the time. But my interest started when I was very young, and I watched In Love and War, with Sandra Bullock, and I thought he seemed so tortured and passionate (even portrayed by Chris O’Donnell). I think, in real life, he was very charismatic and even magnetic…And he hurt everyone around him when he fell into the darkness that consumed him more and more throughout his life, leading  up to the moment when he took his own life in his later years.

Hemingway was married to four different women-each of them remarkable in her own way. When I was asked if I would be interested in covering Mrs. Hemingway, by Naomi Wood, I was ecstatic. A novel that describes Hemingway’s relationships with his four wives, based on letters and anecdotes from his life? I couldn’t resist.

When Mrs. Hemingway begins, Ernest is married to Hadley, his first wife and the mother to his first born son. She has been traveling with Ernest and living in Europe, and she recalls the moment when she met Ernest and how they fell in love, then the terrible events leading up to her divorce and the entrance of Pauline, the spunky young fashion journalist with family money and not a care in the world for anything…Except the charismatic Ernest Hemingway, of course.

Next we travel through Pauline, who was always a little naïve, and who swore she would never let Ernest go…But when the driven, intelligent, recklessly brave war correspondent Martha Gellhorn enters the scene she doesn’t stand a chance.

Martha and Ernest were passionate and explosive, feeding off one another for energy, for inspiration, and eventually draining one another until Martha finally had enough…But Ernest had the sweet, lovely Mary waiting in the shadows to swoop in and give him the affection and care he craved.

Ernest’s wives were very different, but they all saw something in Hemingway that made them risk everything to have him. Perhaps this is one of the things I find so fascinating about him. So many women, smart, decent women, fell into the storm of his life and fell back out again.

Mrs. Hemingway only takes a surface-level approach to the relationships of these women with Hemingway, but I believe Naomi Wood’s most remarkable accomplishment with this novel is her painfully accurate portrayal of life with a talented, charismatic man who said and did despicable things, hurt people around him, and who was so afraid to be alone that he didn’t have space for a single gap between women in his life…who drowned himself in liquor until he finally lost his mind.